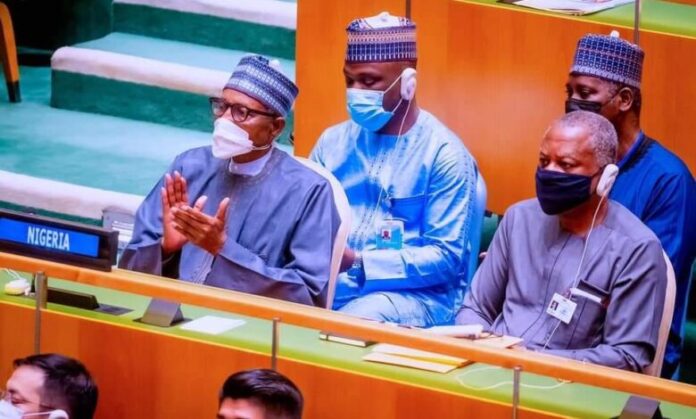 President Muhammadu Buhari has called on the United Nations General Assembly (UNGA) to put in place solutions to end the proliferation of illicit small arms and ammunitions across the world in order to stem the tide of global terrorism.

Buhari, who addressed the 76th General Assembly on Friday said illicit trade of arms has affected the security of Africa, the Sahel and Nigeria in particular in no smal way.

Recall The New Diplomat had reported that Buhari would address the 76th General Assembly on the theme; “Building Resilience through Hope – To Recover from COVID-19, Rebuild Sustainably, Respond to the Needs of the Planet, Respect the Rights of People and Revitalise the United Nations”.

The president also stated that there is a need for global partnership in combating trans-border crimes and terrorism.

Speaking on terrorism in Nigeria, Buhari said his administration has recorded remarkable successes in dealing with Boko Haram, adding that the defence of the terrorist group has been weakened.

“It is on this note that my delegation calls for the world wide application of the Arms Trade Treaty to codify accountability in conventional arms trade, which is critical to the security of nations. This is in recognition of the need for a broad-based global partnership in the on-going battle against trans-border crimes, including terrorism and piracy.”

Buhari added that Nigeria has made strenuous efforts in combating COVID-19.

The president listed the efforts to include, building of 140 COVID-19 centres with testing and detection capacities; building of several isolation centers and hospitals; training of 14,000 health workers on Infection, Prevention and Control measures; and establishment of 16 infectious disease treatment centres located within teaching hospitals and Federal Medical Centres.

Let me, on behalf of the government and people of Nigeria, congratulate you on your well-deserved election as President of the 76th Session of the United Nations General Assembly. I would like to assure you of the full support and cooperation of the Nigerian delegation throughout your tenure.

18 In West Africa especially, our democratic gains of the past decades are now being eroded. The recent trend of unconstitutional takeover of power, sometimes in reaction to unilateral changes of constitutions by some leaders, must not be tolerated by the international community. Nigeria fully supports the efforts by ECOWAS to address this growing challenge and appreciates the support of both the African Union and the United Nations. In this regard, I would like to reiterate that as leaders of our individual Member-States need to adhere to the constitutional provisions of our countries, particularly on term limits. This is one area that generates crisis and political tension in our sub-region.

Why General Yahaya Is Succeeding As COAS – Nwachukwu

A Generation Ambushed By Drugs, By Dakuku Peterside

WHO Reacts As Countries Shut Borders Over Latest Covid Variant

Okowa’s Conclave Of Political Dinosaurs Must Know That Omo-Agege Is Unstoppable, By Prince Efe Duku

Scores Of UK-Bound Travellers Stranded At Airports Over Omicron