Reactions have begun to trail an investigative report which allegedly linked late NASCO Group’s founder, Ahmed Idris Nasreddin and his decades-old brand to terrorism financing in the country.

NASCO is the producer of varieties of biscuits and cornflakes and other consumer goods popular in Nigeria and in West Africa.

The report which was published by West Africa Weekly on Sunday, claimed that Nasreddin used proceeds of his business to help fund Izala Movement, an influential Islamic body, alleging that the movement birthed Boko Haram, one of the world’s deadliest terrorist organisation.

Nasreddin a citizen of Eritrea, a country in the horn of Africa region of Eastern Africa was born in 1925 and passed away in March, 2021. His company is based in Jos, Plateau State.

The report also fingered the late father of Kaduna-based Islamic cleric, Sheik Abubakar Gumi, said to have died in 1992. According to the report, the fundamentalist’s activities of Gumi’s father– a well respected Islamic figure in Nigeria and in the Sahel region were heavily funded by Nasreddin.

The Izala, a movement was also reported to have bred Yakubu Musa Kafanchan, the current Chairman of the Katsina state chapter of Jama’atu Izalatil Bid’ah Wa Iqamatus Sunnah (Society of Removal of Innovation and Re-establishment of the Sunnah).

Kafanchan was alleged to have established a terror network which has alliance with a GSPC group, “Groupe Salafiste pour la Prédication et le Combat” (Salafist Group for Preaching and Combat) with base in Kastina and Kano as far back as 2002.

Kafanchan was said to have been arrested by police operatives in 2005, four years before the emergence of Boko Haram. He was arrested over his alleged activities with the GSPC, a group which has its roots in Algeria and notorious for stockpiling arms and dangerous equipment.

Also, Alhaji Shahru Haruna, a member of the Izala movement and the Deputy President of Kano state chapter of JIBWIS was alleged to have alliance with the GSPC.

Just like Kafanchan, Haruna was arrested over allegations that he was responsible for funding terrorist activities including smuggling of goods.

However, the duo were later released and have grown to become respected preachers of Islam, influentials people who dine with people in government, the report said.

On December 25, 2011, a St. Theresa Catholic Church, Madalla, Niger state was bombed, killing 35 people and wounding a further 52. The attack, alongside other attacks in Jos, Gadaka and Damaturu, were claimed by Boko Haram.

According to the report, the GSPC was also responsible for providing funding and support worth N40,000,000 ($250,000 at the time) to carry out the attacks.

The report partly reads: “Nasreddin was an Eritrean who moved to Jos in Nigeria’s Plateau State, and grew his father’s small manufacturing business into a $460 million conglomerate involved in everything from breakfast cereal and confectionery to pharmaceuticals, real estate and energy. After many years of growth and success, he eventually handed his sprawling business empire over to his son Attia Nasreddin, and retired at an old, satisfied age.

“A Wikileaks cable from 2002 hints at American hesitancy on the subject of freezing NASCO’s Nigerian assets due to the economic implications for Plateau State and political implications in Nigeria. The real proof of Nasreddin’s double life however, comes from the US Treasury Department which publishes a comprehensive account of how he launders and moves money around the world for terrorist entities. Want to hear the real kicker? Nasreddin has been funding and laundering money for none other than GSPC – the Algerian terrorist group which Yakubu Katsina and Shahru Haruna are also involved with at the exact same time.

“Using money made from selling market-leading FMCGs to Nigerian consumers, a cross-border network of terrorism is being nurtured that will someday kill the very kids eating NASCO cornflakes every morning. And it’s all thanks to this nice gentleman from Eritrea.

“Nasreddin however, is a very rich man. Like all very rich men, he appears to have a way around problems that would ground other people. In 2005, Lisa Myers and Aram Roston of the NBC News Investigative Unit discover that despite his designation as a terror financier in the US, Nasreddin’s Nigerian business empire and his Italian hotel are still operating as normal.”

However, neither NASCO, nor any government official has reacted to the allegations in the report even as the revelations have continued to generate barrage of reactions from Nigerians on social media.

Senator Shehu Sani, who represented Kaduna Central in the 8th National Assembly, in his reaction described the allegations as doubtful, adding that it will take a lot of evidence to convince him.

The Kaduna-born politician stated this on his official Facebook page.

The post reads, “It’s doubtful that a reputable company like NASCO, that has contributed immensely to the industrial and economic development of the North and Nigeria as a whole, provided employment opportunities for thousands, assisted families and for decades, remain steadfast in the face of all our political, security and economic challenges, can now be accused of funding terrorism.

“More facts are needed otherwise let’s not destroy those who believe and still stand with us while others have left for long”.

“The core facts of the ‘NASCO funding terrorism in Nigeria & beyond’ expose cannot be contested as those evidences are extracted from verifiable sources such as UN Security reports, US Treasury, Wikileaks, CBN & CAC Archives. It is irrefutable!”(@UncleFarr)

“From Obadiah Mailafia to Commodore Kunle Olawunmi down to David Hundeyin’s Nasco exposé all of them are saying the same thing.

“All of them are connected with the same line of conversation. You can’t tell me they are all wrong.”(@Uchesame)

“I know there might be some arguments over the accuracy of some the supporting evidence @DavidHundeyin presented; but a core fact that cannot be ignored, is that the NASCO Group was/is a sponsor of terrorism. Consequently, I will not buy their products.”(@onyeNkuli).

“While Nnamdi Azikiwe and Obafemi Awolowo were busy fighting for independence… Ahmadu Bello and co were actually networking for power. Through NASCO, these guys built a network so deep, so very deep… That it put all of us in deep shit.”(Everest).

Trilogy Over! [Video] How Tyson Fury Knocked Out Wilder In 11th Round To Retain Title

We Must Consistently Embrace Ethics, Values That Unite Us, Says Buhari

Rotational Presidency Not In Constitution, Say Northern Govs, State Position On VAT, Others 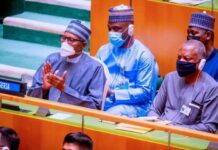 American Actor Granville Adams Dies At 58 After Battling With Cancer

Nigeria Looks To Boost Oil Production By 310% To 4 Million...