To prevent a repeat of last week’s devastating attack which rocked Manchester, this Saturday’s Champions League final between Real Madrid and Juventus will take place amid heavy security.

Due to the suicide attack at Manchester Arena, which left 22 dead and scores injured, vigilance has been heightened and unprecedented security measures were already in place for the game. “The security operation for the four-day period covering June 1-4 will be the biggest ever seen for a sporting event in the UK,” says the Football Association of Wales (FAW).

Most noticeably, the retractable roof of the Principality Stadium will be closed, making it the first Champions League final to be played in indoor conditions. The FAW said security was the “primary factor” in the decision to close the roof, although there is no evidence of a security threat against the final.

Fans will not be allowed to bring bags into the stadium, which will have a reduced capacity of 66,000 for the match, and have been encouraged to use left-luggage facilities in the city centre. They have also been urged to arrive no later than two hours before kick-off to allow time for security checks.

Around 1,500 police officers are due to be on duty in the Welsh capital over the weekend, with local units supported by specialist officers from other areas of the United Kingdom. As the Principality Stadium sits slap-bang in the centre of Cardiff, there will be road closures in place around the city centre on the day of the match. There will also be tight security around the four-day ‘UEFA Champions Festival’, which takes place on the picturesque seafront at Cardiff Bay and is expected to attract over 200,000 people.

But as for previous finals, the match will not be shown live on big screens in fan-designated areas. Madrid talisman Ronaldo cancelled a sponsor event in London last Saturday after the UK’s terror threat level was temporary upgraded to “critical”, meaning an attack may have been imminent.

The threat level has now been downgraded to “severe”. There was visibly tighter security at several major sporting events that took place across the UK last weekend, including the FA Cup final and the English Premiership rugby final.

Less than two months ago, the team bus of German team Borussia Dortmund was targeted by three roadside bomb blasts prior to a Champions League home game with Mona 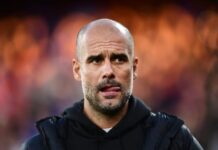