A former Vice President and Chieftain of the ruling All Progressives Congress (APC), Atiku Abubakar has called on the federal government to immortalize the acclaimed winner of the June 12 Presidential Election, Chief Moshood Kashimawo Olawale (MKO) Abiola, saying the events of that day cannot just be wished away.
“June 12 and the events that brought it are part of our country’s history and cannot be forgotten, especially because of the unity and comradeship displayed by Nigerians on that Election Day in 1993,” Abubakar said.
In a statement issued by his Media Office on Sunday in Abuja, Atiku described late MKO Abiola, the leading personality of the June 12 struggle as a national “Hero and Patriot’ deserving of accolades and honour by Nigerians and the Federal Government ensuring necessary tributes were paid to the late Chief Abiola of blessed memory by naming a befitting national institution after him.”
He further said, the events of June 12, 1993 are a watershed in the history of the nation and therefore it behoves all Nigerians to work hard to ensure that the nation never again repeats that painful experience.
“Atiku Abubakar recalls that June 12 traumatized Nigerians and made some people to question the unity and oneness of the country and whether true democracy can take root in the country.
The Wazirin Adamawa commends Nigerians for moving beyond the challenges thrown up by June 12 and putting in place a democratic system of government that has lasted for 18 years. He says that it is a testimony to the innate democratic nature of Nigerians that today, democracy is flourishing in the country adding that restructuring of the country as being demanded by some well-meaning Nigerians would further consolidate democracy and give greater impetus to the unity and development of the country.
“Restructuring of the country would lay a solid foundation for prosperity and self-reliant development across the country by introducing healthy competition among the constituent parts of the Federation based on the principle of comparative advantage,” he added.
Meanwhile, Ogun, Oyo, Osun and Ondo State Governments have declared Monday, June 12, as public holiday to commemorate the annulment of June 12, 1993 presidential election won by the late business mogul, Chief MKO Abiola.
This was contained in separate releases signed by the secretaries to the Government of the three states and made available to journalists.
The release from Ogun reads: “Consistent with the practice of the past six years, and, as a way of identifying with and keeping the ideals of June 12 alive, the Ogun State Governor, Senator Ibikunle Amosun, has declared Monday, June 12, 2017 as work free.
“The annual holiday is in honour of the late illustrious son of the state, Chief Moshood Kasimawo Olawale Abiola, widely believed to have won the annulled June 12, 1993 presidential election, which marked a unique watershed in Nigeria’s democratic development.” 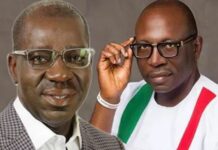