Three years ago, Niloofar Rahmani became the first woman to earn her wings in Afghanistan’s air force. But her place in history as an international symbol of female empowerment and courage has effectively cost her the ability to live in her homeland.

Now, she’s seeking asylum in the United States.
Capt. Rahmani said it’s no longer safe for her to live in Afghanistan. Her attorney, Kimberly Motley, said her client has received numerous threats from insurgents and condemnation from government officials.
“If she were to return to Afghanistan, she would be in fear of her safety,” Motley told CNN’s “The Lead with Jake Tapper.”

‘I always wanted to be a pilot’

Rahmani, 25, became the country’s first fixed-wing pilot in 2013, fulfilling a lifelong dream — one that her dad had hoped to accomplish.
“I always wanted to be a pilot,” Rahmani said. “Being a pilot was my dad’s dream.” 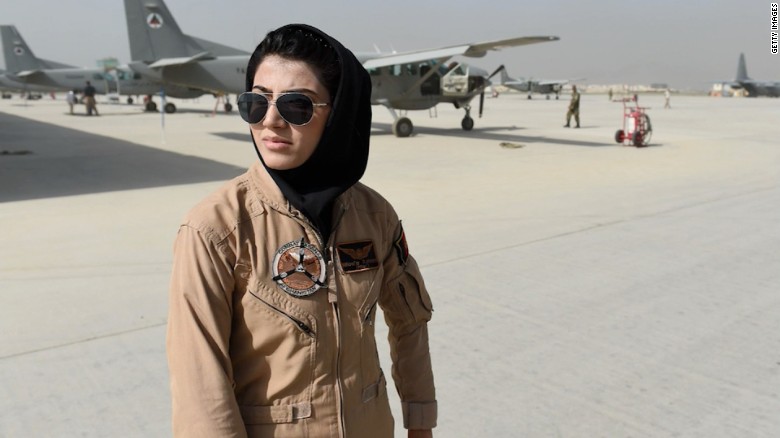 For Rahmani, the goal was as much about honoring her father as it was telling the world that “girls can do the same job in Afghanistan that the men can handle.”
She would go on to fly over 1,000 hours in the air — devoting her life toward fighting the insurgency.
“She is a shining light for women, for immigrants, for Muslims around the world,” Motley said.

From role model to lightning rod

The more Rahmani became a role model, the more she became a lightning rod of criticism that has drawn reaction from top Afghan military officials.
In response to her asylum request, Gen. Mohammad Radmanish asked the US to reject her asylum request because he was “sure she lied by saying she was threatened, just to win the asylum case.”
Beyond personal threats she’s received, her family has also received death threats, forcing them to relocate several times.
Over the past year, she had trained at air bases throughout the southern United States.
“There is a war, there is a violence, there is discrimination against the female in Afghanistan,” she said.

A plea to the president

Tapper, who has asked Donald Trump about Rahmani and other Muslim women, gave the pilot a chance to relay a message to the president-elect.
“I understand the problem with ISIS and the people who say they’re Muslim, and doing this by showing the world how bad Muslims are,” she said. “Unfortunately, as a Muslim Afghan female, I always try to fight against ISIS.”
Her asylum application is now pending.

Allegations By Okorocha: My Own Side Of The Story — Uzodinma