Clinical trials to try to find an effective treatment for Ebola patients are to start in West Africa next month.

The medical charity Medicins Sans Frontieres, which has been helping lead the fight against the virus, says three of its treatment centres will host three separate research projects.

Meanwhile, Liberia’s President Ellen Johnson Sirleaf has lifted the state of emergency imposed in the country.

She warned “this is not because the fight against Ebola is over”.

It marks the progress being made in the country, where the weekly number of new infections is falling.

In a radio address she told the nation that night curfews would be reduced, weekly markets could take place and preparations were being made for the re-opening of schools.

One trial involves using the blood of recovered Ebola patients to treat sick people in the Guinean capital Conakry.

Two antiviral drugs will be trialled in Guinea and an unconfirmed location.

“This is an unprecedented international partnership which represents hope for patients to finally get a real treatment,” said MSF spokeswoman Dr Annick Antierens.

The Ebola outbreak is thought to have infected more than 14,000 people, almost all of them in West Africa. The death toll has risen to 5,160.

The first trials are due to start next month. Initial results could be available in February 2015.

The World Health Organization announced in September that experimental treatments and vaccines for Ebola should be fast-tracked.

Two experimental vaccines, produced by GlaxoSmithKline (GSK) and the Public Health Agency of Canada, have already been fast-tracked into safety trials.

The GSK vaccine is being tested in Mali, the UK and the US. Research on the Canadian vaccine is also under way in the US.

The three latest trials are:

Around 400 people participate in the first trials and they will be extended to other centres if the early results are promising.

Prof Peter Horby, from the University of Oxford, said: “There’s a great need for these trials.

“There’s both the humanitarian need, a tragedy for individuals and for communities and we need to do everything we can to offer some hope to those communities.

“But there’s also scientific need, we have these products which may or may not work in patients with Ebola and the only way we can test them is during an epidemic.”

There have been some anecdotal studies in previous outbreaks suggesting blood transfusions could benefit Ebola patients, but there is no scientifically proven evidence. This will be the first time there has been a human trial on any significant scale.

“There are three important components [of this study] – the first is identifying Ebola survivors willing to donate blood. The second is the actual blood collection, and the third is the administration of the blood [to Ebola patients].”

However, organising safe blood donations in countries with decimated health systems is an enormous task.

“There will be an anthropological assessment which will hopefully give us the information we need to understand a bit better how such a study would be perceived by the community” said Mr van Griensven.

“It will also give us a deeper understanding of the perspectives of people who have survived Ebola because suddenly they could have a specific role within the whole scale of treatment for other patients.

“This will be a key component to help us start implementing this study in a respectful and appropriate manner.”

“Each patient who consents to be part of a trial will have the potential risks of being subjected to a new therapy clearly explained,” she said.

MSF said these trials were “an exceptional measure in exceptional circumstances” as they try to bring the outbreak under control.

Cumulative deaths up to 11 November 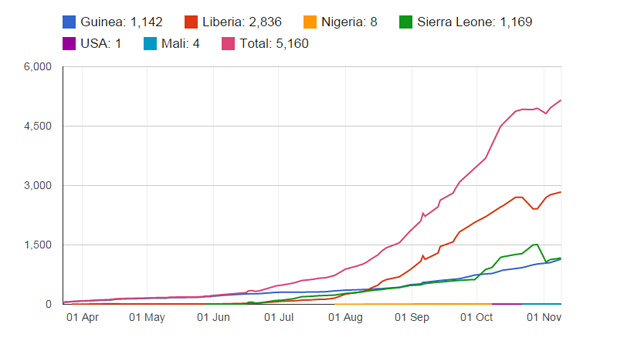 *Figures are occasionally revised down as suspect or probable cases are found to be unrelated to Ebola. Figures for Liberia, Sierra Leone and Guinea up to 9 November, while those for Mali, Nigeria and the US up to 11 November.

NDDC Board: FG Gets 21-day Ultimatum As Delta Youths Protest Over Sole Administrator

Ogoni Clean-up: How FG Is Playing Politics With Exercise –Wike

January 10, 2021
A Boeing 737 passenger jet with 62 people onboard disappeared over the sea in Jakarta, Indonesia yesterday, moments after take-off from Soekarno-Hatta International Airport. Media...

January 10, 2021
Nigeria on Saturday recorded 1,585 new cases of COVID-19, with eight new fatalities logged into the national tally as the second wave of the...

Shock As House On The Rock Pastor Dies Of Covid-19

January 9, 2021
A minister with the House on the Rock, Yinka Akinbami has died of Covid-19 complications at the age of 61. Senior Pastor of the ministry,...