After a historic but awkward comet landing, the robot probe Philae is now stable and sending pictures – but there are concerns about its battery life.

After two bounces, the first one about 1km back out into space, the lander settled in the shadow of a cliff, 1km from its target site.

It may be problematic to get enough sunlight to charge its batteries.

Launched in 2004, the European Space Agency (Esa) mission hopes to learn about the origins of our Solar System.

It has already sent back the first images ever taken on the surface of a comet.

Esa’s Rosetta satellite carried Philae on a 10-year, 6.4 billion-km (4bn-mile) journey to Comet 67P/Churyumov-Gerasimenko, which reached its climax on Wednesday.

After showing an image that indicates Philae’s location – on the far side of a large crater that was considered but rejected as a landing site – the head of the lander team Dr Stephan Ulamec said: “We could be somewhere in the rim of this crater, which could explain this bizarre… orientation that you have seen.”

Figuring out the orientation and location is a difficult task, Dr Ulamec said.

“I can’t really give you much more than you interpret yourself from looking at these beautiful images.”

But the team is continuing to receive “great data” from several different instruments on board Philae.

It may be possible to reconfigure Philae’s landing gear and “hop” to a new location, but Dr Ulamec said there may not be enough time to do the analysis required for such a risky strategy.

“There is a limited amount of battery power there and the solar panels are not really illuminated, so we don’t know precisely how long it’s going to last,” said Rosetta mission manager Dr Fred Jansen.

The robot probe, the size of a washing machine, was dropped from the Rosetta satellite on Wednesday and spent seven hours travelling down to the icy body.

News of the “first” landing was confirmed at about 16:05 GMT

Controllers re-established radio communication with the probe on cue on Thursday after a scheduled break, and began pulling of the new pictures.

These show the feet of the lander and the wider cometscape. One of the three feet is not in contact with the ground.

Philae is stable now, but there is still concern about the longer-term situation because the probe is not properly anchored – the harpoons that should have hooked it into the surface did not fire on contact. Neither did its feet screws get any purchase. 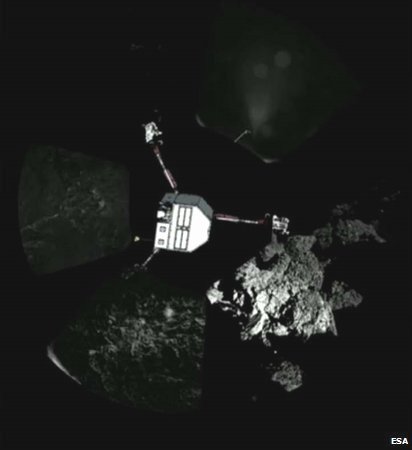 Several images have been taken on different sides of the lander, illustrated here with the pictures arrayed around it

Lander project manager Stephan Ulamec told the BBC that he was very wary of now commanding the harpoons to fire, as this could throw Philae back off into space.

He also has worries about drilling into the comet to get samples for analysis because this too could affect the overall stability of the lander.

“We are still not anchored,” he said. “We are sitting with the weight of the lander somehow on the comet. We are pretty sure where we landed the first time, and then we made quite a leap. Some people say it is in the order of 1 km high.

“And then we had another small leap, and now we are sitting there, and transmitting, and everything else is something we have to start understanding and keep interpreting.” 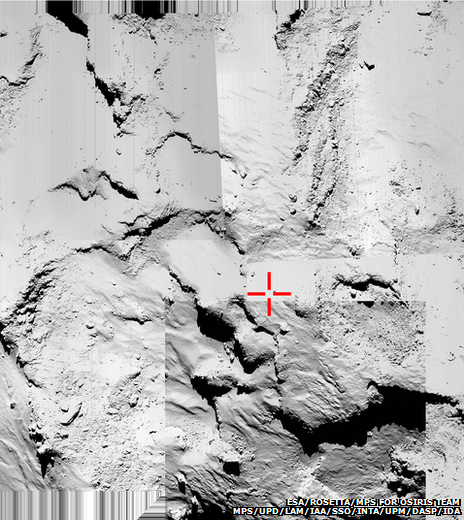 Where did Philae actually touch down? Images taken by the OSIRIS camera on Rosetta show the area surrounding original target site (highlighted in red) 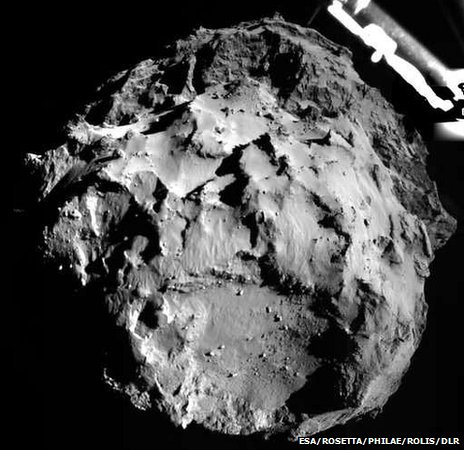 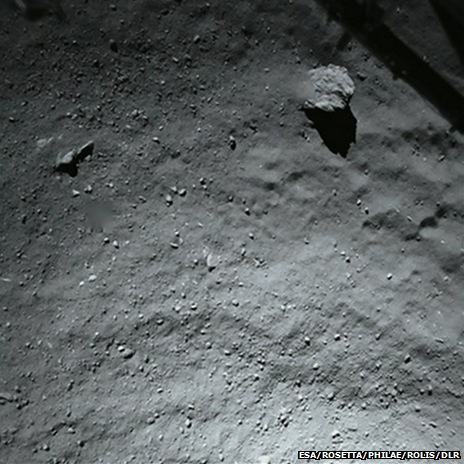 ..and then this one when the lander was just 40m from its bumpy touchdown

Another very important concern is the amount of sunlight available to Philae.

The probe set off from Rosetta with 60-plus hours of battery life, and will need at some point to recharge using its solar panels.

But early reports indicate that in its present position, the robot is receiving only one-and-a-half hours of sunlight during every 12-hour rotation of the comet.

This will not be enough to sustain operations.

As a consequence, controllers here are discussing using one of Philae’s deployable instruments to try to launch the probe upwards and away to a better location. But this would be a last-resort option.

The Royal Mail is commemorating the landing with a special postmark, which will be applied to all mail delivered across the UK from Friday to Saturday

First, the team really needs to fully understand where Philae is on the surface and what lies around it.

Holger Sierks, the principal investigator of the science cameras on Philae’s mothership, Rosetta, which is circling the comet overhead, said his team was now trying to take pictures of the robot on the surface.

These pictures will show very little detail because Rosetta is many tens of kilometres away, but they will help pinpoint the place the little probe came to rest after its bouncing.

Even if Philae does not live beyond its initial battery life, scientists will be delighted with the data they have already got.

This information will transform what we know about these objects, and enable researchers to test several hypotheses about the formation of the Solar System and the origins of life.

One theory holds that comets were responsible for delivering water to the planets. Another idea is that they could have “seeded” the Earth with the chemistry needed to help kick-start biology.

Can you land on a comet?

Scores Of Nigerians Trapped As Volcano Erupts In Caribbean Island Of...