Liverpool, Chelsea, and Newcastle are some of the English Premier League clubs who have shown support for the Black Lives Matter movement, following the death of American George Floyd.

Floyd died on May 25 after a white police officer, Derek Chauvin who has since been charged with his murder, held him down by pressing a knee into his neck.

In his memory, a number of Liverpool players, including James Milner, Virgil van Dijk, and Andy Robertson, tweeted pictures of the squad on one knee around the center circle at Anfield on Monday with the message, ‘Unity is strength #BlackLivesMatter’.

The squads at Chelsea and Newcastle followed suit on Tuesday after footballers Marcus Rashford and Jadon Sancho had both called for “justice” over Floyd’s death, which has led to protests across the United States.

Before training at Cobham Tuesday morning, the Chelsea players and coaching staff formed the letter H, for humans, and knelt in a show of support for the #BlackLivesMatter movement. 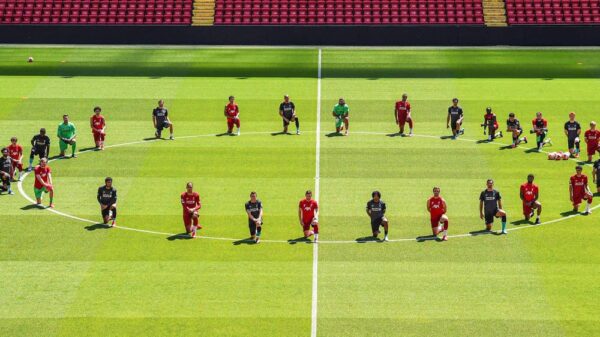 “It is something where we want to use our position to express that we are living in a world where we have to try to improve it for the future, to be a better world with more love, without hate,” Cezar Azpilicueta told Chelsea’s official website.

Recall that Jordan Sancho called for “justice” after scoring for Borussia Dortmund on Sunday.

Sancho put Dortmund 2-0 up 57 minutes into their Bundesliga match against Paderborn, before removing his jersey to reveal an undershirt with a message reading “justice for George Floyd”.

Sancho, who came through Manchester City’s academy before moving to Germany in 2017, and team-mate Achraf Hakimi were both shown a yellow card for removing their shirts during the tribute. 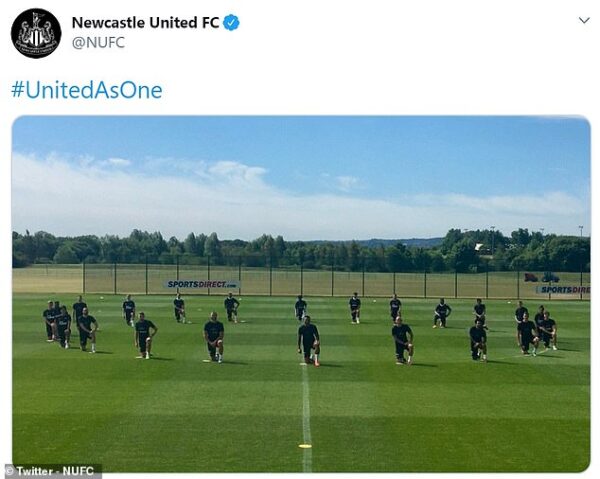 But, The Fédération Internationale de Football Association, FIFA has since released a statement urging competition organizers to use their “common sense and have in consideration the context surrounding the events” if a player shows their support for Floyd.

FIFA President Gianni Infantino added: “For the avoidance of doubt, in a FIFA competition the recent demonstrations of players in Bundesliga matches would deserve an applause and not a punishment.

Sancho, who was part of the England squad that was subjected to sickening racist abuse in last year’s Euro 2020 qualifiers in Montenegro and Bulgaria, went on to score a hat-trick in the 6-1 victory.