In  what many see as a puzzling and interrogative  move,   the   United  States  government’s  official letter to the chairman of the Bureau of  the Board of Governors of the African Development Bank, and minister of planning and development  of the Republic of Cote d’ Ivoire, Niale Kaba, has raised serious  ethical questions about the whole crisis and corruption allegations racking the African Development Bank(AfDB)’s president, Dr Akinwumi Adesina.

The United States in its letter dated May 22nd, and addressed to  Madame Minister Niale Kaba in her capacity as chairman of the AfDB’s Bureau of Board of Governors  and signed by Steven Mnuchin, Secretary of the Treasury of the U.S. some salient issues bordering on  integrity crisis were raised while underscoring its position that “ the United States cannot  support dismissing the allegations at this stage” because “ the  Board of Governors must demonstrate that this institution takes  governance , anti-corruption, and transparency seriously.”

Mnuchin added: “ We thus request that you(Madame Kaba)  take steps to initiate an impartial, independent investigation into  these allegations.  Whatever the outcome, the AfDB  will emerge stronger  for having taken seriously its obligations to uphold good governance. The United States sincerely wishes AfDB to remain a high-quality institution with the capability to address the needs of the African continent, particularly at this critical time.

“Considering the scope, seriousness and detail of these allegations against the sole candidate(Adesina) for the Bank’s  leadership over the next five years, we believe that further inquiry is necessary to ensure the AfDB’s president has broad support, confidence and a clear mandate from shareholders.”

The background to this has it foundation in an initial internal investigations conducted by the AfDB’s ethics committee which exonerated Adesina of all charges leveled against him by  a group of “whistle-blowers.” In its reaction, the  United States which has been a financial member of the financial institution  for 37 years  voiced its open disapproval, and demanded an independent  and transparent probe into the issues.

While faulting the ethics team’s work and findings, U.S. treasury Secretary, Mnuchin said: “Had the Ethics Committee undertaken a proper preliminary examination that was in line with the Board of Governors Resolution B/BG/2008/11, standard practices at other international financial institutions, and the Bank’s own rules and procedures, it would have reviewed available facts that could be gathered by external counsel and found in internal Bank records.

“We fear that wholesale dismissal of all allegations without appropriate investigation will tarnish the reputation of this institution as one that does not uphold high standards of ethics and governance.”

Premised on this, the United States seems unwilling to let go the issues in contention, and the allegations against Adesina if  what it calls an independent and transparent investigation is not carried out.  So what are the issues really?

The Ethical Issues and the Ethics Committee’s Findings

Sometime in  April this year, the AfDB’s  Ethics team led by  Takuji Yano, a Japanese national reportedly unveiled a  report following a petition brought to its attention by a group  of staff of the financial institution, who had  leveled  various allegations  against Adesina. These allegations were captured in petitions from whistle-blowers.

However, the Ethics team in its findings, exonerated Adesina, saying that  on the basis of the petition received  it was evident that “it was not based on any objective and solid fact.” According to Yano, the Japanese national and an executive director, who chaired the Ethics team’s investigations, the whistleblowers were incapable or failed to  back up their allegations with evidence-based proof.

The whistleblowers on the other hand, insisted on maintaining their anonymous identities, stressing that coming forward to openly provide such proof would naturally or inevitably open them up to attacks and blow -open their masked identities. But in the meantime, Nigeria’s President Muhammadu Buhari  had saluted the report of the ethics committee’s which exonerated  Nigeria’s Adesina.

But that was not the end of the road as the drama escalated as the whistle-blowers accused Adesina of deliberately sabotaging the Ethics Committee’s work including allegedly using arm-twisting tactics to over-rule the Ethics team’s works, and deploying strategic loyalists within the Bank to undermine the work of the Ethics committee through threats. They cited threats allegedly issued by one Jennifer Blanke, vice president of the bank and a loyalist of Adesina.

That was the road to the full blown crisis as the Whistleblowers consequently externalized their petition, forcing the United States to step in. This may have prompted the US demand for an independent  and transparent probe.

The Allegations Against Adesina.

For instance, the petitioners accused Adesina of using the bank’s resources for personal gain. According to them  when Adesina  received   the following personal awards of the following sums– the World Food Prize (USD 250,000) and the Sunhak Peace Prize (USD 500,000) – 2017 and 2019, the bank took responsibility for all the associated cost.

“Dozens of people, Bank staff, executive Directors, former Head of State, entertainers or family members attended the award ceremonies at the Bank’s costs (one in Des Moines, Iowa, the other in Seoul, Korea). If these awards were private, why did the Bank support associated costs? If they were awarded to the President of the Group of the Bank were the awards returned to the Bank?”, the whistleblowers alleged.

Not done yet. The whistleblowers also accused Adesina of inappropriately appointing one Victor Oladokun, managing director of 3D Global Consult, and a childhood friend of the AfDB president , as consultant  for a fee of  $326,000 contract without due process and in clear conflict of interest as they are both childhood friends.

Another ethical issue raised was that Adesina allegedly usurped  the powers of the HR department by over-ruling the HR director of the bank over the confirmation of one Emmanuel Ezinwa. In protest, the HR director allegedly resigned in rage.

There are also  allegations of how Adesina allegedly stalled the efficient management of the sum  of $120 million TAAT(Technologies for African Agriculture Transformation) program fund allegedly working in collaboration  with one Fregene whom he brought to AfDB.  On this specifics, the Whistleblowers alleged in their petition thus:

“In 2018, IITA, the implementing agency, proceeded to purchase through direct procurement USD 5.46m worth of pesticides from a multinational company, while the grant contract specifically prohibited such procurement method. Fortunately, the fiduciary controls of the Bank stopped the process, but Mr. FREGENE went ahead and personally negotiated the price directly with the supplier and asked for the shipment of the pesticides.

“When confronted by senior management, he tried to launch a competitive bidding process to cover up the direct purchase. The fiduciary controls of the Bank worked once again, and the payment of the supplier’s invoice was blocked for non-compliance with Bank rules.When informed, the President himself requested the payment to be released to the supplier.”

Not through yet, the whistleblowers further accused Adesina of using the Banks funds to pay for the services of a personal biographer. According to them  Adesina  hired  a biographer, one Leon Hasser to allegedly pen his own personal promotional BIOGRAPGHY  entitled: “Against All Odds. World Food Prize Laureate Dr Akinwumi Adesina and His Drive to Feed Africa” (ISBN: 9781728315386)  using the bank’s funds to bankroll the project.

They alleged: “It is unclear why the Bank paid for this biography, which was not officially promoted by the Bank, nor translated to the other official language of the institution. It primarily focuses on the accomplishments of the President when he was Minister of Agriculture in Nigeria and only received some limited publicity in Nigeria. More surprisingly, the terms of reference of Dr HESSER’s mission state that “all outputs delivered under this consultancy contract will remain the property of the protagonist of the book (Dr Akinwumi A. Adesina)” in contradiction with the usual Bank provision on intellectual property which states that “all proprietary and intellectual property rights (…) will be vested in (…) the Bank.”

All efforts to reach Adesina have been  most unsuccessful.  A very close ally of his who worked with him while he was minister in Nigeria and subsequently followed him to AfDB could also not be reached either as at last night. Several text messages to the ally were unanswered.

The New Diplomat however gathered that Adesina has already put together in written form his defence, saying that the allegations are unfounded and misleading. According to him, some interested parties are working in concert with the whistleblowers with hidden motives, stressing that the issue of the funding arising from the two awards bestowed upon him has no basis because  he “ donated the money from the two awards to help create the World Hunger Fighters Foundation.”

Another close ally of Adesina who is also privy to his position said the president of AfDB has already penned the following defence: “AfDB staff did not attend these events because the president was the recipient of the World Food Prize, but because the bank was promoting the launch of its Technologies for African Agricultural Transformation (TAAT) programme during these events”.

On the specifics regarding the TAAT lingering financial scandal, the AfDB president conceded that  though it is true that the contract breached ethical and appropriate procedures but he however, clarified that as the president he only intervened to protect the integrity and reputation of the bank from institutional damage arising from likely litigations on the matter.

Clearly, the last has not been heard about these lingering allegations as the United States insist that ” the allegations set out in the whistleblower’s complaint submitted on January 19,2020 raise significant issues that all relevant government bodies of the Bank must  handle with the utmost care using all tools available to them”.

The United States further averred that ” had the Ethics Committee undertaken a proper preliminary examination that was in line with the Board of Governors Resolution B|BG|2008|11 Standard practices and other international financial institutions, and the Bank’s own rules  and procedures, it would have reviewed available facts that could be gathered by external  counsel and found in internal Bank records.” 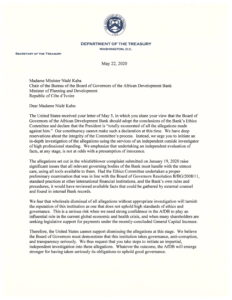 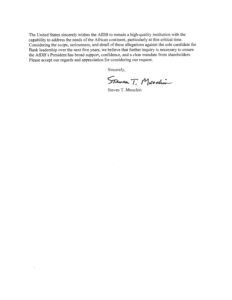